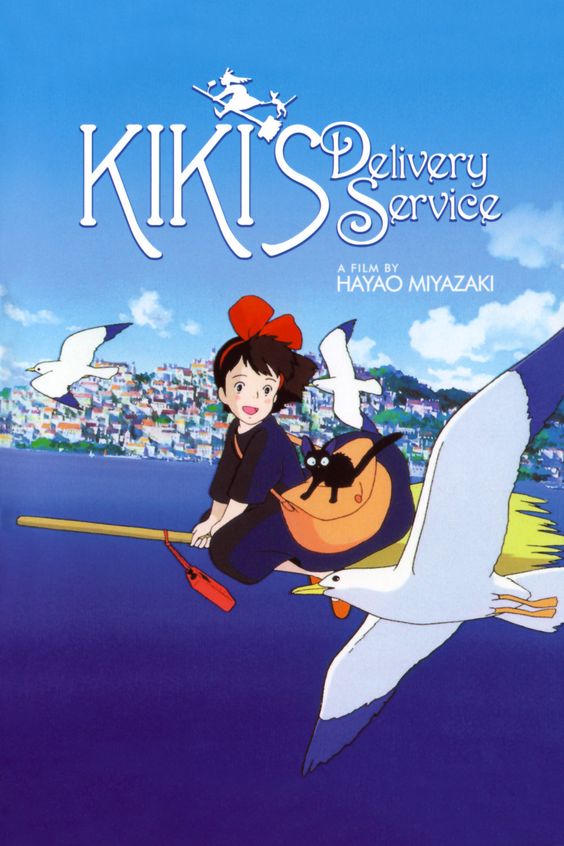 A long time since I edited the cinema section at City Life. The freelancers knew more than I did but fuck ’em. Amidst the wax and wane of my relationship with the flicks…some significant exceptions aside I wasn’t much of a fan as a teenager, got very into them as a young man, and stopped watching them almost completely when the magazine closed…I can’t think of a film which has more positive associations for me than Kiki’s Delivery Service…the story of an apprentice witch who leaves home to learn what it is to grow up.

Studio Ghibli’s fourth feature is the sort of film whose virtues inspire unrealistic aspirations when showing it to a child…there’s so much that soars above the level of standard fare. The way the colour palette is reminiscent of the great Japanese printmakers. The way the detail extends to the margins of the frame. The way the setting is imagined as a European old town if WWII had never happened. The way the scenes unfold at the pace of serious drama.

Winningly, it borrows the Disney device of a wisecracking sidekick (the little black cat, Jiji) but slots him into a tale of unusual subtlety. In fact, Kiki’s Delivery Service is about as far from a conventional narrative as you could get. What’s astonishing about the film is that Kiki herself does not at any stage encounter an adversary…only her own inexperience, lack of confidence in flying her broom, and obstacles to her interior growth. It’s not only ravishing to behold, and entrancing to follow, it’s a character study more than a tale.

My own affection for the film is bound up with memories of my stepdaughter Pip seeing it for the first time, when she was six. I’ve never seen a child so completely possessed by something for an hour and a half. At the climax, an airship accident which sees Kiki’s friend Tombo clinging for life, she sat rigid, wide-eyed, fingers in her mouth, scarcely breathing. She’d never seen a proper cliff-hanger before. She didn’t know, as she would come to recognise, that it would be okay.

A fleeting moment, you might think. But last year Pip left for university with a newly inked Jiji tattoo on her wrist. As she’s grown up she’s collected the other Studio Ghibli films, developed an interest in Japanese culture, and is saving up to visit the country when she can. It’s still her favourite film, she tells me, though she’s no memory now of that first heart-stopping viewing. Very kindly, she’s sub-edited this for me to ensure I don’t embarrass her. I just hope she hasn’t messed too much with my copy.